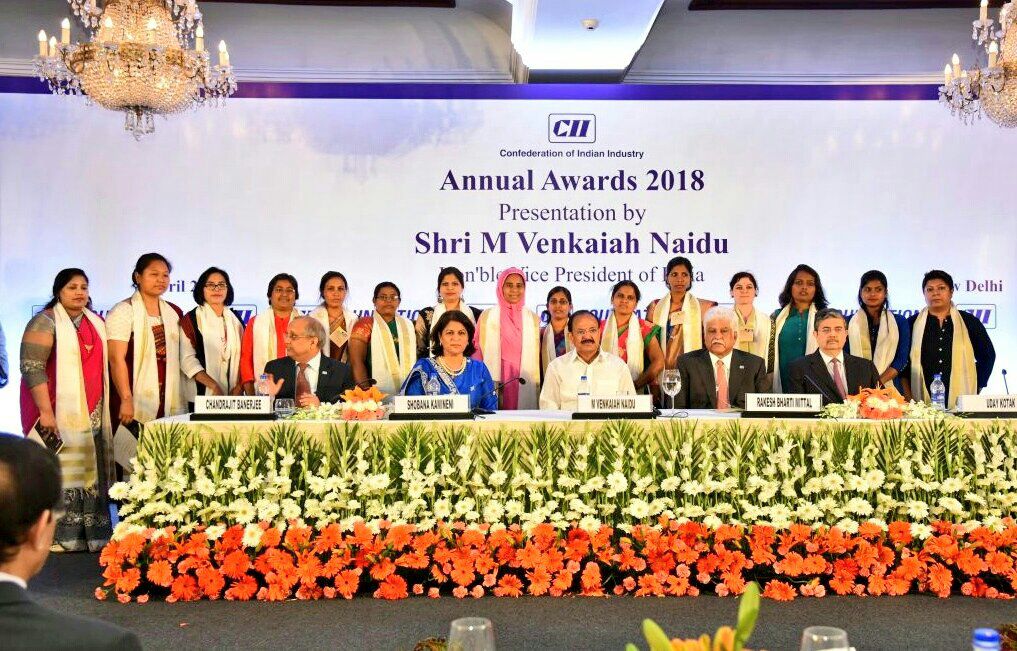 Founder and President of Anubhuti Trust, Deepa Pawar, was selected as a finalist in the CII Foundation’s Woman Exemplar Program 2018, along with 14 other grassroot leaders in the fields of Education, Health and Micro Enterprise, out of 227 nominations from across the country. 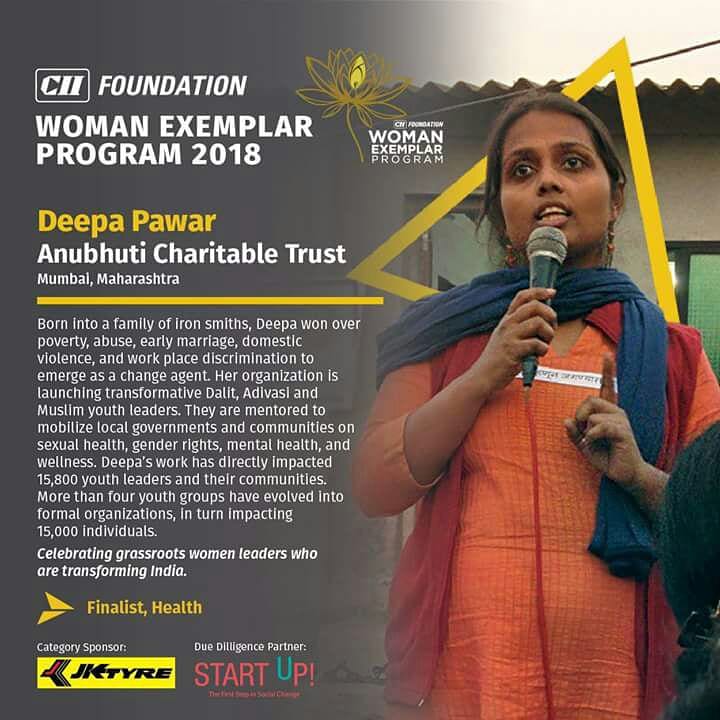 Deepa was invited by the CII Foundation, of the Confederation of Indian Industries , to New Delhi on the 8th of April 2018, to be honoured by a panel including the Vice President of India, Shri Venkaiah Naidu.

Deepa was recognised for her contribution in the field of health and her experience of working with grassroot communities.

In over 17 years of experience, Deepa has formed youth groups and run rights-based campaigns in Mumbai’s Koylabundar, hilly slums in Sewri, Juhu Koliwada, Bandra Plot, etc. with deprived, at-risk, trafficked & homeless youth. She is a core team member of the state-wide Right to Pee campaign. She has a Masters in Social Work and works as trainer with NGOs, youth, government officials on topics of gender, rights, leadership, health, sexuality, mentoring, etc.

The youth groups that Deepa has formed have gone on to be one of the accepted leaders in their area whom community members approach when in need. Young men in these youth groups mentored by her have taken difficult stands in family and community for rights of choice, education and career for their sisters and wives. Some have given up abuse of drugs. Both young women and men in her mentorship have helped stop public sexual harassment in their community. Local leaders and community religious leaders have changed their views on gender rights having been influenced by the work of these youth. Young women living in a home for trafficked and homeless have overcome severe trauma and started pursuing avenues for their development. Youth mentored by her are part of national campaigns for equal rights of sanitation, food and dignity and they are successfully bringing these campaigns to the grassroot by implementing them in their own communities.

Deepa writes in newspapers and magazines, speaks on news channels, and advocates with government officials and political leaders from municipal corporation to state levels for their role in rights-based policies and implementation. Till date she has reached above 15000 people directly and above 3 lakh people indirectly through her work in the areas of health, gender justice and grassroot leadership, and the youth she has mentored have reached another 15000 people through their work.

In the beginning a few women and ASHA workers arrived, and I thought it would be theusual kind of workshop I am used to, with selected stakeholders from the community. But Isuddenly saw two tempos filled with men who were workers and labourers. It felt like a wavehad arrived for intellectual discussions. This is the … END_OF_DOCUMENT_TOKEN_TO_BE_REPLACED