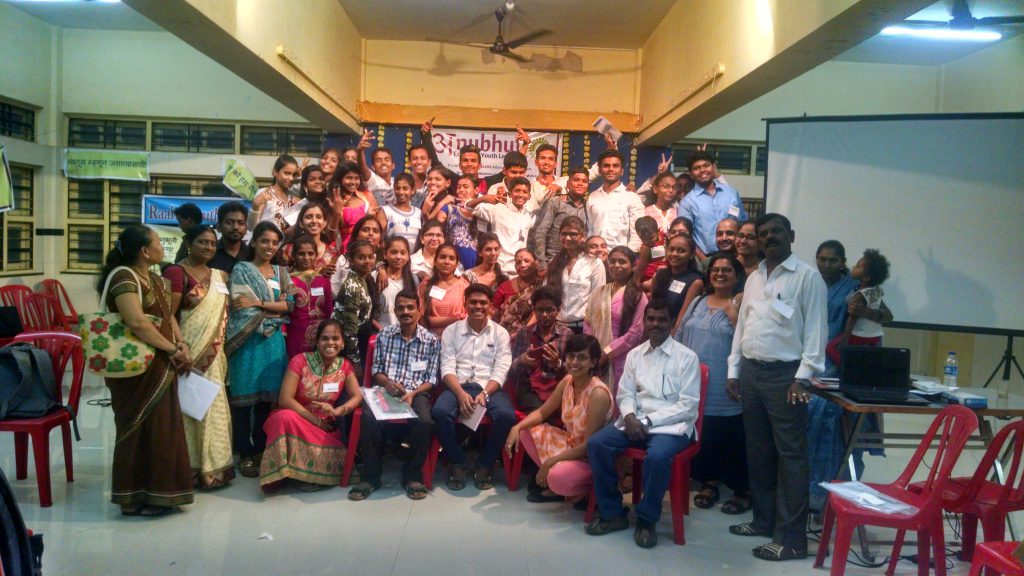 Every year for these 16 days between November 25 to December 10, across the world, community activists, NGOs, businesses, and governments come together to fight for a cause that is to end gender-based violence against women and girls. Power packed campaigns are organized to bring attention, galvanize actions and changes that have an impact. This year, Anubhuti marked this campaign through various events and programs throughout the months of November and December. 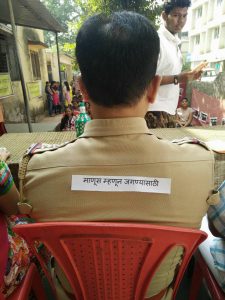 25th November marks the International Day for the Elimination of Violence against Women and the start of 16 Days of Activism Against Gender-Based Violence. Anubhuti joined the world in supporting the cause through a series of events throughout November and December, under its theme ‘Manus Mhanun Jagnyasathi Hinsamukt Bhaymukt Samaj (Envisioning a Fearless and Violent Free Society)’ which aligns with the United Nations Sustainable Development Goals agenda for 2030.

Anubhuti kickstarted this campaign by organizing a Rangoli Competition on 12th November 2017 in semi-rural Kolegaon, Dombivali East. Participants used art as a tool to speak out against gender-based violence, by presenting ideas of women empowerment and the participation of women in every sector. Some participants innovatively stuck rupee notes in the Rangoli to symbolize ‘women’s economic empowerment’. To ensure these ideas do not remain limited to the designer’s mind, the Basti Vikas Samitis (village development committees) that were formed in October, made note on how to take these thoughts forward in a concrete manner.

Anubhuti observed the World Toilet Day on 19th November by organizing a youth-led toilet audit on 5 toilets in the Bamanwada community.The audit showed that toilet complexes which are meant to take care of the need of 800-1000 households 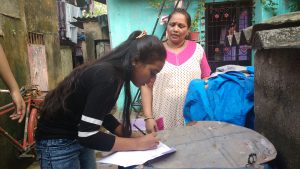 has no running water, no facilities for persons with disabilities, smashed doors, unhygienic conditions, long wait hours and no proper sewage and drainages.This raises a question on the kind of toilets built and maintained under Swachh Bharat and Open Defecation Free Campaigns. The audit showed the aptness of this year’s theme ‘Wastewater’ in the Indian context. Since the inception of the World Toilet Day, the government started focusing on building more and more toilets, but proper facilities for these toilets to serve the purpose they were built for is somewhere lost.

In India, estimates show that 300 million women are forced to defecate in open, and many have to wait for long hours or nightfall just to have privacy. The roads leading to these community toilets are not properly maintained and passes through filth. Being forced to defecate in open or use unsafe community toilets, women and children often end up being victims of rape and molestation. This is an abuse of women’s right to body dignity, privacy, sanitation, health as well as their sexual and reproductive well-being.

Supporting these causes of women’s right to dignified san 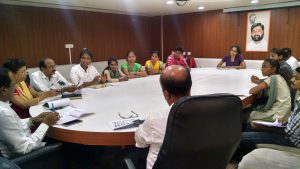 itation, and sexual and reproductive health, under the blanket of ‘Sharir Sanvaad Abhiyaan’ and ‘Right to Pee’ campaign, Anubhuti on 21st November 2017 with Raahi Youth Network, Kolegaon Youth, and Basti Samiti members met with the Mayor of Kalyan Dombivali Municipal Corporation, Deputy Commissioner, Head of the Health department and Executive engineer to discuss these issues. 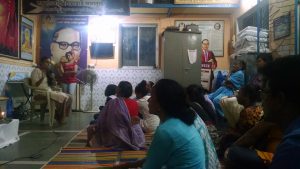 ear to commemorate the adoption of Constitution of India. On 26 November 1949, the Constituent Assembly of India adopted the Constitution of India, and it came into effect on 26 January 1950. Anubhuti celebrated the day by holding a session on Nagar Raj Bill with the members of the Bamanwada community. Nagar Raj Bill is a way to ensure better participation of people in democratic processes.

The conference threw a light on the reason behind the silence of the victims as lack of information and awareness, as well as societal inequalities. As Anand Jagtap said in his presentation, “An environment of fear has been created, due to which violence gets normalised.” The audience was encouraged to ask questions and interact with the panelists. Many members of the communities, especially youth, asked questions about police response, legal processes, and the responsibilities of elected members. The Youth of Bamanwada made a presentation based on the toilet audit they conducted in the area, focusing on the need for better facilities for people with disabilities. Youth from Kolegaon and Dombivali made a presentation on structural and social violence against women. They described how gender roles are constructed by society and imposed on children, and are at the core of violence against women.

“So long as you do not achieve social liberty, whatever freedom is provided by the law is of no avail to you.”

These words by Dr. B. R. Ambedkar have guided generations and we being the heirs of social activism in India such as that of Savitribai Phule, Fatima Sheikh and Dr. Ambedkar, hold the responsibility to pass it to coming generations. He transformed the way India today looks at socio-economic policies, education, legal incentives and many other spheres of Indian life. 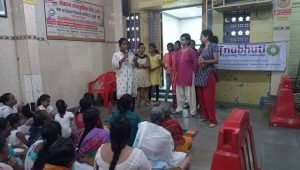 Youth are not only the leaders of tomorrow but also the partners of today. Youth are the social actors of change and progress of the nation. Their contribution is crucial in nation-building – to discuss the same Anubhuti held a talk at Jetvan Buddha Vihar, Bamanwada on ‘Keeping Ambedkarite Practices relevant to youth’ on 3rd December 2017. 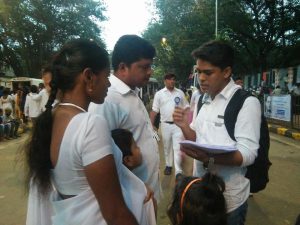 On 6th December 2017, to commemorate the death anniversary of B R Ambedkar, supporting the cause of ‘Save Bhidewada School’, which is the where the first school for girls was started by Savitribai Phule-Indian social reformist and cardinal in initiating girl education, Raahi Youth Network ran a letter campaign at Chaityabhoomi in Dadar, collecting signatures of over 500 people in support of the #savebhidewadaschool campaign.

Putting a strong focus on women’s leadership, and to encourage women political leaders to be supportive of their female constituency, A 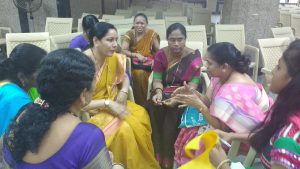 nubhuti organized a workshop with Nagarsevikas (Female Corporators) of the Kalyan-Dombivali Municipal Corporation on Gender and Politics on 8th December 2017. Women leaders of KDMC, including the head of the Mahila Bal Kalyan department, talked about the need for gender-sensitive budgets and accessible facilities in their areas. The participants agreed to continue to work with Anubhuti to develop their leadership skills as well as their constituencies.

On 18th December 2017, Anubhuti conducted a gender workshop with 23 principals of Zilla Parishad schools from all over Kalyan, Dombivali, Titwala, Murbad, and Mumbra. Discussions challenged biases of gender, and the participants showed an acceptance to new ideas such as not dividing classroom roles according to gender, questioning sexist textbooks, the unders 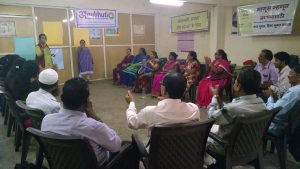 tanding sexuality of adolescents, dealing with their growing up issues sensitively and so on. After debates and disagreements, the workshop ended with a tentative plan to appoint few teachers in school, who will be trained by Anubhuti in counseling students on any questions or doubts that they might have regarding their sexual, physical and mental health. This would be the first step in making schools fearless and violence-free.

The last program under 16 days of Activism was a workshop in Kolegaon with 100 women consisting of domestic workers, women working from home, women working as a part of self-help groups and other women working in the informal or unorganized sector. This workshop on 27th December 2017, led by Deepa Pawar, touched upon the need for safety at the workplace, as well as the concept behind the Prevention of Sexual Harassment at the Workplace Act 2013. It is noteworthy that this workshop was entirely organized by the members of Anubhuti’s Basti 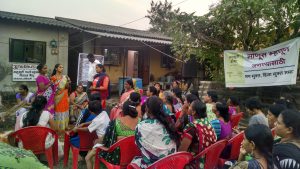 Vikas Samiti of Kolegaon, which was formed in October. The Samiti took lead right from the planning stage, to the anchoring of the program. Women were invited from within Kolegaon, as well as from nearby rural areas of Katai, Dheslepada, Nirje as well as from Dombivli city.

Talking about the importance of such workshops, a Samiti member said, “As a domestic worker myself I know the many issues we have to face- not only sexual harassment- but also other issues that hurt our dignity such as giving us separate utensils, not being able to use the toilet, and so on. Such workshops are not only necessary but also should happen regularly.”

As we all know, women in India face a lot of problems and to empower women one needs to understand and eliminate the main cause of these ill practices, that is, the patriarchal and male dominated system of society. Anubhuti believes in building solidarities for sustainable change, based on empathy and rights and works towards achieving the same through women and youth-led movements.

It is liberating to hear a young woman speaking about her sexuality, especially on a public platform like this.. Of course we have sexual feelings, but no one acknowledges it.

― Young woman in audience after hearing a Raahi member speak